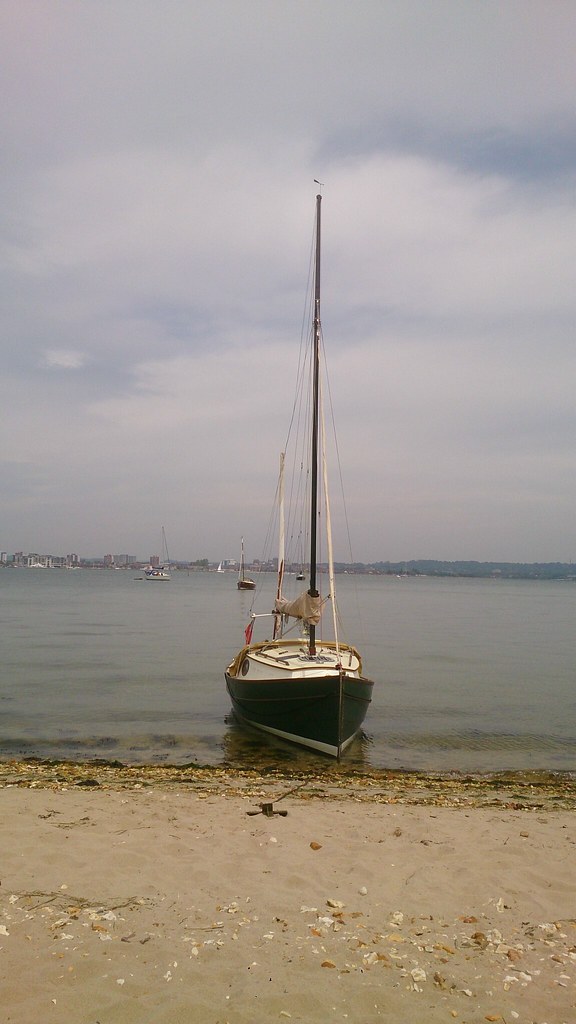 A sunny Bank Holiday weekend, but a bit cold. I had two nights on board. Arrived Saturday evening and motored straight out to Shipstal Point, where there were about four other boats at anchor. Very quiet night, but cold. Jumpers on in the sleeping bag. Several tappings on the mast which took a bit of tracking down.
In the morning I sailed off the anchorage and didn't put the motor on until coming back in to my mooring the next day Basically sailed around the harbour, checking on what has changed and if my winter modifications worked. The main feature of the harbour were the number of empty moorings. Surely by May they should be filled? Signs of the times maybe, sailing is an expensive hobby.
Anchored off Arne in the Wareham channel. Ended up on the mud, which gave me a superb view of a flock of black tailed godwits. Not a common bird, and two had coloured leg rings, which I have reported to the BTO ringed birds website. Lying in my sleeping bag, I worked out I was likely to be aground for most of the morning, so I turned out at midnight and paddled out into deeper water. Incredibly quiet.
On the Bank holiday itself I beat against wind and tide with just the main and jib. The mizzen doesn't really add much when tacking, so I often furl it if I am going to be beating for any length of time.
After beaching on Brownsea Island for lunch, I experimented with sailing just with the mainsail, with one reef in it as it was quite gusty. She sailed surprisingly well. A bit slower to tack, but no risk of going in irons at all. I then practised sailing up to a series of buoys with the plan of trying to pick up my mooring under sail. It all worked out fine in the open bay, but I blew it in the marina. I turned too late and was about 3ft short. I had the engine ticking over, so motored round and tried again. Engine conked out! Missed the buoy and drifted around a bit before I could restart it. Third time lucky.
Winter mods generally good, but I have abandoned the rope horse for the main sheet. It worked, but the block kept banging on the coaming and I thought that would cause damage in the long run. I think the mast may have a little fore rake, so I will work on that next time down.
There are two Baycruiser 23 in Poole now. I saw one sailing and she looked wonderful. Her mainsail looked huge compared to mine
The Navionics app on my tablet worked very well and the plots are shown on the Google map below.