I have been making some soft shackles from a length of left-over dyneema, and I am pleased with the results. The first was too small for anything. The next was just big enough to go round the mizzen boom for the sheet to clip to. 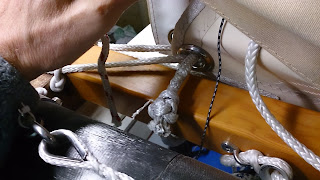 The third started out 12" long but was nearer 8" when complete, but still big enough to go round the boom and through the mainsail clew, to hold the clew close to the boom when the outhaul is slackened off. I have got enough dyneema left over to make one more. I followed the instructions on the YouTube video below for making soft shackles. Not difficult at all, but a bit slow as I don't have the long fids recommended. I did it an inch at a time with a Swedish fid and a pair of long surgeon's forceps.

I have made Daisy G and honest woman at last. I coughed up £25 to get her registered on the small ships register and she now sports a neat little SSR number next to all her other ID plates. I don't plan to take her abroad in the near future, but I would like to leave her on the Baltic one year and fly out for sailing when the weather is good. Curiously, I ordered the number plate from a web site called signomatic.co.uk, which was far cheaper than any shoe repair/engraving shop, but when it arrived it had been made and sent from Sweden, so maybe that confirms that I should take her there one year.
Posted by Julian