The current copy of Woodenboat Magazine (Nov/Dec) has a good article by Kathy Mansfield on Swallowboats, their history and range of boats. There is a fine picture of Daisy Grace in amongst all the others, being helmed by my daughter at the English Raid on the Solent in 2010. I'm clearly just mobile ballast. I know my place when she's onboard.
Posted by Julian No comments:

I have just picked up the kit for a salmonboat Chinook canoe. This is what it should look like when finished: 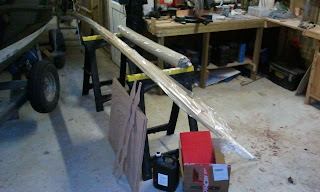 This is what it looks like now, a roll of linen, three CNC plywood panels of frames and thwarts, a bundle of softwood stringers, a flask of activated linseed oil and various additives, threads and glues. The idea is that the frames and stringers are covered in the linen, which is soaked in the activated linseed oil. When exposed to UV light this cures to a firm resin. If it doesn't I shall get very wet, but it should do. 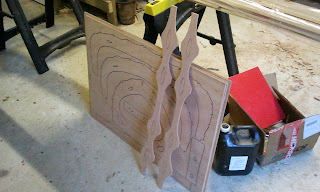 This will keep me busy for the winter. Need to finish various bits on Daisy G first, and then I need to build the building base.
Posted by Julian 3 comments: 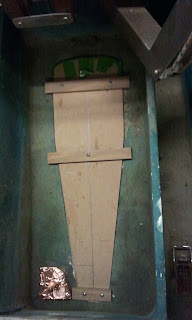 I have done a bit further work shaping the template to the outboard opening. I don't think I will get it any better. The next stage is to cut it out of some 18mm marine ply, which I have yet to order. I realised as I was fitting it under the engine that I was sliding it in and out quite easily as a single piece, so I am not going to cut it in half and fit hinges. I am going to keep it in one removable piece, which is held down by a central cross piece which twists to go under a a pair of catch block on the sides. I have raised the depth sounder transducer which was sticking out further after I removed the surrounding plywood which held the flaps in place. I just cut out the bit of that plywood which had the hole for the transducer in it and fitted it on top of the floor, rather than underneath. The transducer is now flush with the bottom of the boat again. I have recovered the wooden block which holds it in anti-slug copper tape. I put some on two years ago and it really works. I only replaced it because it became loose as I fiddled with the unit. 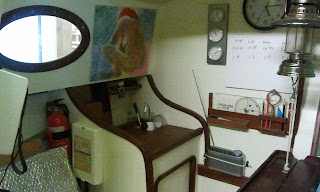 In the cabin I have been working up some distracting paintings to keep me company on long nights at anchor. This one was done on six small panels so that it could fit the curve of the cabin side. I think she looks quite fine. I don't realy go for nautical pictures in a boat. You need something to take your mind off the mess you have got yourself into.
Posted by Julian 5 comments: 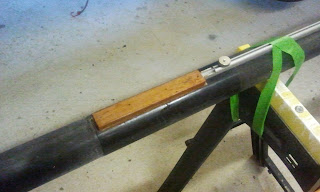 The goose neck slide track had come loose and twisted last season. I took it off, to find that it was just held by four screws into the mast wall and some black mastic. Cleaned off all the gunge, filled the screw holes (which had enlarged, with thickened epoxy and then stuck a length of oak over the line of holes. I hollowed the back of the oak with a circular sander on the multi tool. Stuck it all down with a bed of thickened epoxy. I straightened the track in a vice quite easily and screwed the track back on. 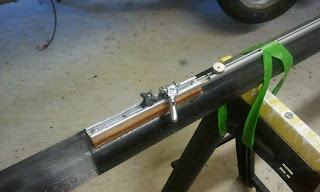 The gap in the base of the sail track is to allow the sail slides to fit in, which they just do The whole thing is I hope much more robust now. There is a lot of lateral force on the goose neck in a strong wind and the original fixing was a bit slight.
Posted by Julian 2 comments: 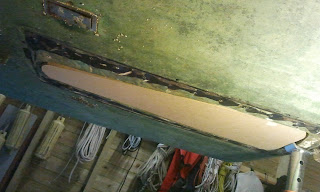 The infill panel progresses. I put the engine back in and experimented with spaces. With the panel cut in two length ways it can be hinged and there will be room for the two parts to fold up out of the way when the engine is lowered. So I have decided to go for it instead of replacing the flaps. I have made up a new infill out of 18mm MDF to use as a template for the final 18mm marine ply panels. It fits quite well. I might modify it slightly for an even better fit, but I don't think I will want it completely tight. It will need epoxy and antifoul on it, so there needs to be a bit of room.
The stern end of the opening had a single plastic flap right across it, held in place by a strip of plywood across the back of the opening. The screw heads were full of epoxy and irremovable. The multi tool came into its own again and cut them off flush using a metal cutting blade.
Posted by Julian 1 comment: 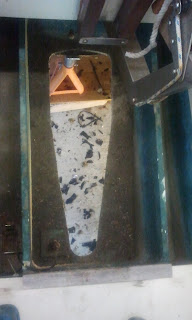 I have removed the outboard well flaps from the other side now. I used the Bosch multi-tool with a scraper to loosen it, which made it much easier than just working a screwdriver around the edge. I also found it is wonderful in removing hardened barnacles, which just fly off. 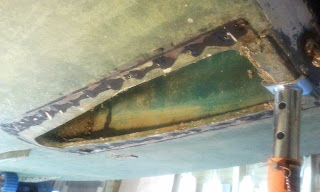 Crawling about underneath I used the multitool on the layers of sealant left on the underside of the hull, and again it was a revelation. where I had anticipated a horrible upside down job with a scraper and a face full of filth, the sealant just rolled off. It looks as though the hull had been copper coated before the faring panels were fitted, so I haven't exposed great areas without anti fouling. These is still some left, but it should be  fairly easily removable. What I have discovered, on putting the outboard back on board to check clearances, is that I can now turn it almost through 90 degrees each way. What had restricted it before was a flange on the engine leg hitting the edge of the plywood covering the flaps. With that plywood off, the engine can turn much more. 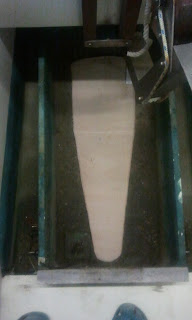 I have made up a dummy faring panel, which I have sawn in two, length ways. It seems to have room to be hinged open, but I am going to have to fit some temporary hinges to check that it really fits. If it does I shall get some proper marine ply and do a proper infill job. Not what I planned, but I think it could be better than the original flaps. 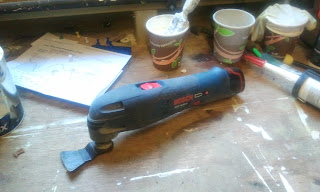 I can't over emphasise just how useful I have found the multi-tool. I thought it was a bit of indulgency when I bought it, but I use it for everything. It is better than a hack saw for delicate cutting and better than every other sander I have got. Cleaning off half the sealant layer used up one battery, but by the time I had used a second one to clean off the other side, the first battery was recharged. I love it. I have also bought a drill and impact screw driver from Bosch, which use the same batteries, so I have four batteries and two chargers. Having separate drill and driver again speeds things up exponentially.
Posted by Julian 1 comment: 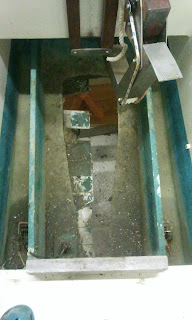 Several of the flaps which overlap to fare the outboard well have either bent, cracked or broken off over the last three seasons. I have to decide whether they really warrant replacing. I am not sure they make that much difference. I have removed them frorm one side. Quite a job as they are sandwiched between a screwed on plywood sheet and the underside of the hull, all held in place with a thick layer of rubbery glue. It was quite a job to get one side off. Putting it back on will not be fun. The yard had the boat upside down when they were originally fitted. Can't see that happening here. 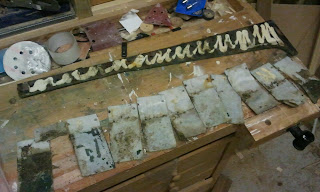 The flaps are double layers of centreboard slot gasket, glued together with a fibreglass infill. I made a couple last year, which was messy. I would need to make 22 to replace them all. I am thinking of building some sort of solid infill instead, but it would have to be easy to remove to lower the motor, and I'm not sure how feasible it really is. I may just leave it as a hole. I need to get the other side off however I decide to go ahead. Not a pleasant job. I don't like lying on my back under anything, trying to work on it overhead. Makes me feel nauseous.
Posted by Julian 4 comments: