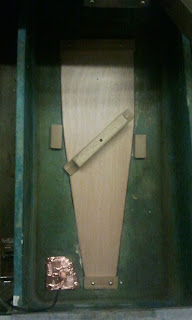 I received my plank of 18mm plywood from Robbins timber last week. They deliver to Cirencester twice a week so it didn't cost me as much for delivery as I feared. I then took my fancy new router and set to work making the new blanking plate. First cut it out roughly and oversized with a jigsaw. Then crewed my MDF template to the cut-out making sure it was central on it. Then using a bearing guided router bit I trimmed all round to form the finished plat. It worked like a dream, it was very straight forward. Just for the fun of it, I fitted a rounding over bit and went round the top edge of the plate, just to finish it off a bit more neatly and possibly to make it slightly easier to fit into the hole. 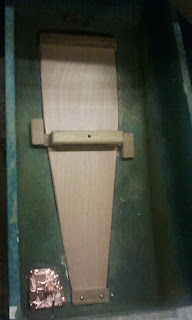 I bolted the handle to the centre of it, so that it can twist. I've made up two catches, in oak which need to be screwed to the bottom panels of the boat on either side of the opening. They still need a bit of finishing off to allow for the slight angle at the keel line. When they are all finished, I will cover them in epoxy for protections, because they will be permanently under water, and put copper tape over them to cut down on fouling.
Posted by Julian