Pianting and other jobs under way 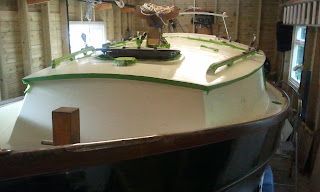 Cabin roof all masked up and I have painted two coats of Dulux Weathershield over the top after fairly thorough sanding and cleaning.
I have invested in some far more expensive masking tape this year. I used cheapo stuff from Lidls last year, and as they say, you get what you pay for. It kept tearing as I pulled it off the roll, and if it was left on more than a day it was very hard to get off. This is green "Frog tape" which went on easily, and I have just removed some after nearly two weeks, and it came off smoothly. 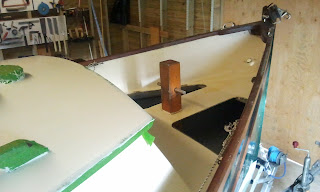 I am planning on a third coat of Dulux. It will be interesting to see how it lasts, but it has stuck on much better than the Toplac I used last year, which peeled off in a few patches before I even left the garage. Probably due to poor preparation, but it happened again after I had cleaned it up and reapplied. 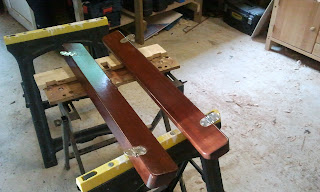 I have taken the cabin table off, drilled out and dowelled the old screw holes, which are now redundant due to it being hinged, and am just restaining before I fix it back in. The dowels are light hardwood (ramin probably) and I had quite liked the idea of two rows of large light wood dots, but they have stained almost to the same colour as the hardwood table.I am also discovering the truism that it is much easier to work on things if you make the effort to remove them from the boat and work on the work bench. In fact it is much less effort, it just doesn't seem so at first.

I have just bought myself a Dewalt combination router, the first I have ever had, to do various planned jobs, such as cutting out the outboard well blanking plate. I have had to order the correct cutter separately as the ones in the set which I did order clearly were wrong when I looked at them, but had seemed right on the website. Shows my experience with routers.
Posted by Julian