Spent the morning at the West Midlands Boat Jumble in Malvern. Always regard this as the start of the boating season. Very cold and not many dealers there. Apparently most of them are based on the south coast, and diesel is getting so expensive that it isn't worthwhile coming up to the midlands anymore. A shame, there used to be two jumbles a year, this one and one at the end of the season in October, but that went some time ago. 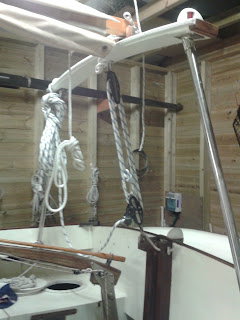 Got a new main sheet for Daisy G. The old one was the former jib halyard and it was never really quite long enough. Now it is. Replaced the lazyjacks main section, which again was old rope and not long enough. 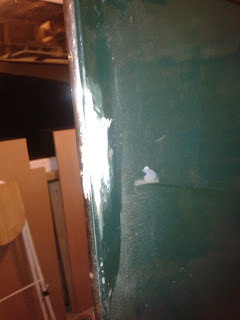 Filled and sanded some old scrapes, the worst being on the bow where a jet ski rammed me last year. The others were scratches caused when I relaunched in August and she was blown onto some else's trailer. I still can't decide if I need to repaint her completely, or just touch up the scratches. I have enough paint to do that, but not enough to paint the whole hull. No one was selling my colour paint at the jumble. 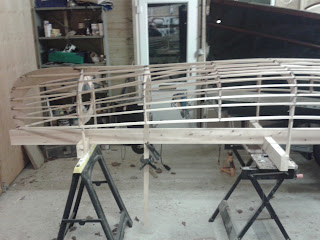 Fixed the canoe gunwales to the bow. After fitting them to the stern I can turn her upright.
Posted by Julian