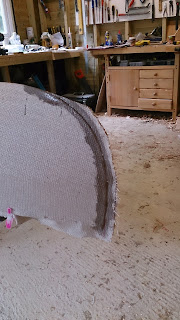 The linen skin is now permanently in place. First I had to stitch around the two stems. Not my best skill, but it is neat and symmetrical, which is what matters. Then the first go with the resin. The resin itself is a modified linseed oil. Slightly cloudy and little odour, but it is very fluid, so easy to use. The hardener, needed for ares which can't get much sunlight on them, is something else. The canoe designer warned me that it was thick, but I thought at first it had set rock hard. Really, really thick. Very hard to scoop out of the container. I had to weigh it and the resin to get a 1:2 mix, which was not that straight forward. Fortunately the hardener did dissolve in the resin really quite easily, so I had a working mix in the end. Painted this over the stems' woodwork and then on the inside of the linen where it touches the stems. Worked it all in until there seemed a could sloppy fit between wood and cloth. Then stitched around the stems with my best back stitch (isn't YouTube useful). Not too difficult, and it holds the shape well. 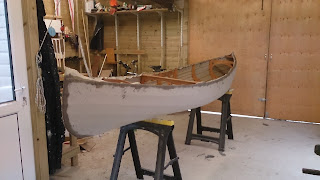 Next worked along both gunwales, stapling the fabric all the way. It was possible to get all looseness out doing this, so the skin is really quite smooth now. Finally, turned over the hull and I can see my boat. But still much to do. I applied unhardened resin along both gunwales and soaked it into the fabric around the stems. I also cut the cloth back to its final position around the stems at this stage. The notes recommend doing this after first cure, but I thought it would be easier to do now. I worked both cut ends carefully into a fully adhering, straight line. This will be stitched again (blanket stitch this time). But first, it needs to go out in the sun to cure the gunwales. sun in short supply, so that will have to wait.
Posted by Julian